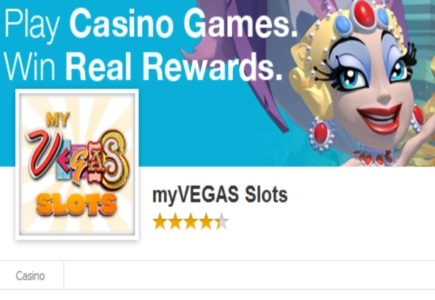 myVEGAS Slots is one of the most popular games on Facebook. The awesome thing about the free casino game is you play to get real rewards and win free comps to the hottest spots in Las Vegas! We’re talking free rooms, restaurant meals, show tickets + much more! The game is worth checking out if you plan on going to Vegas in the future.

Insider Tip: Checkout “myVEGAS Gifts, Guides & Giveaway” Facebook group.  Read their strategy guide, meet a lot of people playing the game and get tons of free coins to help get comps and rewards quicker. The group is very active with over 12,000 members. You can get 100,000+ worth of free coins if you click a bunch of the “Chip Share” links posted in the group. One of the things you’ll learn is it’s a good idea to open a separate Facebook account just for myVEGAS. You can get lots of bonus coins when you share winnings so it’s a bad idea to use your main Facebook account and spam the heck out of your real friends. From what I can tell, most people playing the game have a separate myVEGAS account. Just be careful and don’t add too many myVEGAS friends too quickly.

So, if you’re thinking about going to Vegas, I highly recommend that you check out the game. When was the last time you got free stuff for playing a video game?

Enjoy the game and good luck!