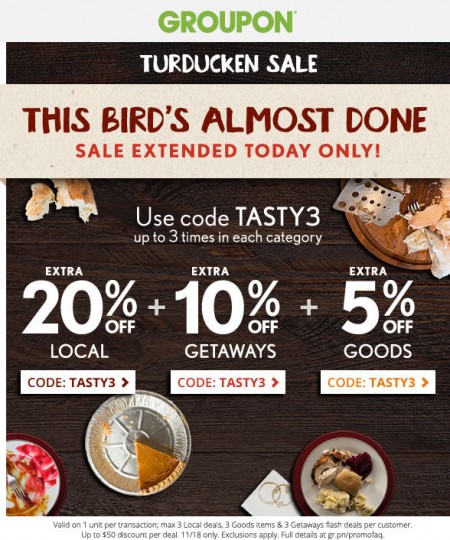 Extended Update: Thanks to popular demand, Groupon has extended their promo code for 1 more day! Remember, you can use the promo code on up to 3 local deals.

Groupon.com is offering an incredible extra 20% off promo code today!

Save an extra 20% off any Local deal on Groupon when you enter the promotion code TASTY3 at checkout! The code is valid on up to 3 local deals per customer. I’ve tested the code and can verify that it works. The code is valid on a single deal per transaction so you’ll need to purchase each deal individually.

In addition to the 3 Local deals, the same TASTY3 promo code will also save an extra 5% off Goods deals and an extra 10% off Getaway (travel) deals.

This promo code has been extended for 1-day only and will expire on Wednesday, November 18, 2015 at 11:59pm PDT. This is going to be a very popular offer so don’t miss out!

The promo code works on any local deal in any city in Canada or U.S. (Ie. restaurants, spas, events & activities, heath & beauty, automotive, home, golf, etc…). Valid on 1 unit per transaction; max 3 Local deals per customer with a maximum $50 discount per deal.